Why Sales Are Hell For Saleswomen

Why Sales Are Hell For Saleswomen

Being a salesperson during sales is no fun, especially when customers are giving you a hard time. Testimonials and advice to make their life easier.

So there you have it, the sales kick off and everyone is going to rush into the stores to rob everything.

Except that in stores, it’s not just the objects of your lust. There are also salespeople, widowers, who drool over it for weeks because you put them through hell and they sleep 3 hours a night. 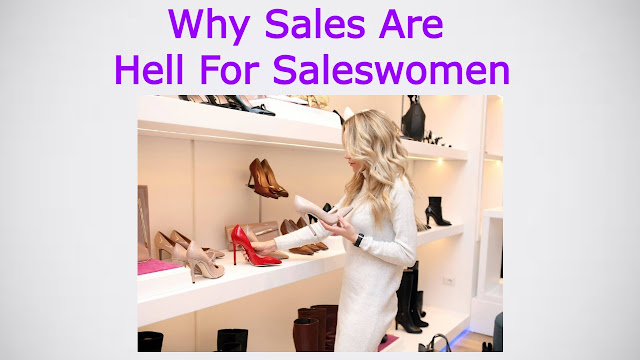 What is life like on the other side of the looking glass? And what can you do to avoid giving buttons to those who work hard for you to do business?

Be a salesperson during the sales

madmoiZelle asked several young women about their experience as a salesperson during the sales.

Because understanding what they are going through is already a step in the right direction!

The exhaustion of saleswomen during the sales

“Being a salesperson in a store during the sales is… exhausting.

Usually, you have to be at the store 1 to 2 hours before opening for the first day.

As a simple saleswoman, I was asked to arrive at 6.30am (for an opening at 8am) but my manager had been in the store since 5am and left it the day before at 9pm.

In the evening, once the store is closed, you have to pick up all the clothes left on the ground and in the cabin, put them back on the shelves, tidy up the shelves and clean up the shit from customers …

Thank you to those who freaked out at McDonalds and left you their cup with the sticky-dripping sundae.

What makes things very, very tiring is a combination of several factors:

Customers in abundance (get elbows, buttocks and tits all day …)

The heat, in summer when the air conditioning is not working, in winter with the heating and the world

The speed of the actions to be carried out (whether at the checkout, in store or in the cabin)

And especially dissatisfied customers and / or who think they are kings. “

Why saleswomen don’t always take care of us during sales

“I was a salesperson for 3 months in a ‘high quality’ brand destocking store.

My bosses were obsessed with the “chic” of the brand, the clothes had to be stacked to the millimeter, the store had to be impeccable …

A priori nothing crazy but in sales periods it is just infeasible!

I was ordered not to deal with customers and only “pick up and fold”, without a break, for 12 straight hours.

Either I was insulted as incompetent when I wasn’t helping clients who asked for me, or I was boiling inside when people brought back mountains of curled clothes to fold up.

Result: -5kg (zapped lunch break + comings and goings between the reserve and the store), a good depression at the end of the day (insults from customers, reprimands from bosses…), and a disgust with shopping for 3 months. “

Read also: How my job almost ended me – Testimonial

When the saleswomen crack up during the sales

You will understand, the job is not easy. This other testimony explains it.

“The first time I went home and cried. Feels like BIG shit, really.

Kids screaming, throwing up. People who leave clothes on the floor.

Those who arrive at the cash register say to you “Ah? Is that -50%? I don’t take ”or“ Oh no, the others on the shelves have a label! – and when you say you’re going to call someone, they finally give up.

People who decide to trade on the first day of sales (PLEASE AVOID!). Those who ultimately have no money to pay and who give you a bag of 150 €.

Apart from all that, the worst part, really, is seeing your whole job messed up.

We spent time labeling the items, and they’re all down.

We suffered while preparing the “sales squares” by size, color, style of clothing and at 9 p.m. (or 8:15 a.m. when the store opens at 8 a.m.) everything is on the floor …

This is what I find painful. “

How to help sales assistants during the sales

Here is the advice of the saleswomen to the customers, story that everyone has, as far as possible, a good time!

“Find out about the return conditions, in order to avoid scandals at the checkout.

If it’s not taken back, it’s NOT taken back, if it’s only exchangeable, just because other stores don’t work that way doesn’t mean it will be here.

And the basic advice: respect the people who work, really.

It may sound stupid to say that, but for me, the customer is not king, he is a human being like me, who demands as much respect as I do.

I have information he doesn’t have, and I only give it kindly and with a smile to people who deserve it!

You’re there to do a cool activity: shopping, so there’s no point yelling at someone who’s there to help! “

“How do you make it easier for saleswomen? By respecting their work.

No, we don’t leave our 4 dresses, 3 sweaters, 4 jeans and 2 pairs of shoes in the cabin, curled up in a corner. We put everything back on a hanger and give it to the saleswoman in the cabin.

In all the stores there is a bar in the cabins, that’s what it is for. How many times have I been told “no, but I don’t know where it’s going in the store anymore, that’s why I left everything in the cabin”?

That excuse doesn’t work anymore, and besides, it doesn’t excuse letting it all fall apart.

Then, when there are buttons on the clothes (I am thinking of shirts in particular), they are REBUTTONED.

It wastes a lot of time putting all the buttons back on while 4 or 5 clients wait, looking upset for you to want to get their clothes back.

And then a minimum of hygiene on the part of the customers, that would be nice …

During the sales, the attendance is such that we quickly accumulate the smells of sweat, feet, not fresh pussies and I do.

So in the end, this is all common sense, but if everyone could behave in a civilized manner (and not just during the sales by the way), being a salesperson would be a much nicer job. “

Read also: The jokes I’ve heard too much as a cashier

“Be polite, ‘Hello, goodbye, thank you’ are words we would love to hear more often from our customers.

Stay calm: there aren’t many of us, we can’t be everywhere, wait your turn!

Be aware that we really don’t have any stock, especially for underwear, so if you can’t find your size on the shelf, don’t bother asking, we won’t have it in stock.

If you drop something, please pick it up.

If you try on items: PITY don’t leave anything in the cabin! Give everything to a saleswoman.

You don’t know how to fold or re-bend? Do not fold anything! We waste more time unfolding your unsuitable folding than folding everything ourselves.

Ditto if you don’t know where such and such an item is, don’t put it back on the shelves at random (it makes you want to murder). “

So this is just a small sample of the testimonials you find in the comments below – sobering, eh, and maybe it’ll calm some down!

Do not forget the key words: