8 Apps To Call Your Loved Ones Abroad For Free

8 Apps To Call Your Loved Ones Abroad For Free

No more exorbitant communication costs! With these eight applications, you will be able to communicate with your loved ones (SMS, calls, etc.) for free from anywhere in the world. 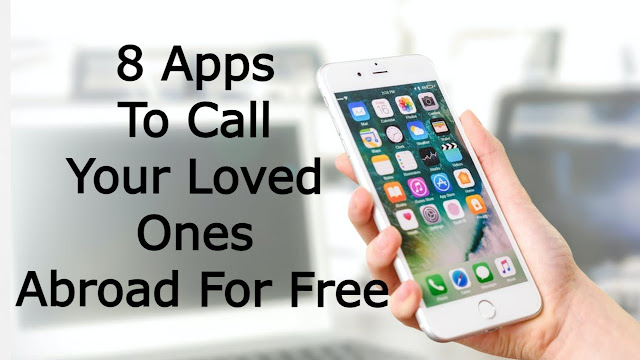 You’re probably wondering how to stay in touch with family and friends without paying a heavy price. Indeed, when you travel abroad, making international calls and texting with your plan can be ridiculously and unpleasantly expensive. So, so that you don’t have to worry about that, we have compiled a list of the best apps to call and send messages for iPhone and Android smartphones. Rest assured, you won’t come home with a $ 1,000 phone bill.

WhatsApp is the world’s most popular instant messaging application. It is used by more than a billion people, and for this reason, it is in your best interest to install it on your smartphone, since many of your friends / relatives are already using it. The app, which is linked to your phone number, allows you to call, send texts, photos, videos and audio recordings without texting. In other words, everything is free, all you need is a WiFi connection.

WhatsApp also offers group chats, ideal for organizing a trip with friends of different nationalities, for example. And WhatsApp is available for iPhones, BlackBerrys, Androids, Windows Phones, and Nokia.

When you think of “travel” and “contact”, the Skype reflex comes in pretty quickly. Need to make an emergency conference call when you are abroad? The Skype app lets you do that. Skype works great for making video calls, including group calls, voice calls, instant messaging, screen sharing, and file sharing. Rather complete then. The app is free if you have a WiFi connection. Skype is available on iOS, Android and Windows Phone.

Skype also offers a no-obligation subscription system that is particularly interesting for the more talkative. For example, a plan to call to the United States with unlimited minutes, landlines and mobiles costs € 3.60 per month. Skype Credit costs 2.1 cents per minute. Prices differ depending on the country (see all the packages available on the Skype website).

Functioning much like WhatsApp, Viber allows you to call, text, and send photos and videos to any other Viber user, completely free of charge. Viber was initially launched in direct competition with Skype. The only catch is that in order to communicate with your relatives / friends, they have to be part of the current 400 million unique users. And app is available on Androids, iOS and Windows Phones.

If not, Viber has launched Viber Out for this, which allows you to call people who are not using the Viber app. It is a fixed line and mobile calling system that is cheaper than a standard operator, and is based on the price of a local call. You can top up your Viber Out credit and then use it to call almost anywhere in the world. A call on a mobile line in France will cost you 7.5 c / min and a call to a landline will cost 2.0 c / min.

Facebook’s “stand-alone” application, Messenger, is one of the most popular messaging services. Very convenient to use, it allows you to send a text, audio or video message (which can be read either via the mobile application or directly on Facebook on a computer). Messenger tells the sender if their message has been read, and allows content to be sent to single contacts or groups.

See also  HOW TO BECOME A U.S. CITIZEN

Facebook Messenger is available on all devices, namely iOS, Android and Windows Phone.

Hangouts (formerly Google Talk) is less famous and less glamorous than the other apps listed here, but it’s still an effective instant messaging tool. Hangouts can easily be found in your Gmail inbox on your desktop, allowing you to send messages, photos, videos, and other files (including GIFs). Good to know, Hangouts allows video calls for up to 10 participants.

Hangouts has the particularity of linking platforms to each other: whether you are in front of your PC or on your Android device, the application gives you the ability to communicate by video conference with someone using Hangouts on their iPhone or Mac. Hangouts is available on iOS and Android.

Launched in 2011 by China’s second-largest web provider, Tencent, the WeChat app is the second-largest instant messaging app behind WhatsApp. WeChat therefore derives its popularity from China, but the app is also popular in some countries in Asia and Africa, such as Congo, Malawi or South Africa. Free, WeChat also offers its users many bonuses available for small amounts, such as “stickers”, images to exchange in a conversation. WeChat is available on iOS and Android.

LINE and WeChat are similar in their functionality. The LINE app is sort of “the world’s largest avatar network”, featuring countless emojis. It allows you to send text messages, images and videos along with “st
ickers”. Other features of the application include games and a payment platform. LINE is available for free on iOS and Android.

See also  WHAT ARE LOGOS And WHY ARE LOGOS IMPORTANT TO THE WORLD?

Telegram offers much the same as WhatsApp or Viber, except that it pioneered end-to-end encryption. Telegram is therefore a secure messaging application, which allows its users to exchange their text messages, audio, photos and videos in an encrypted manner, that is to say unreadable by a third party. Since then, WhatsApp and Viber have followed suit. The only drawback is that the application is little used in the world (just over 100 million users), so you will have to convince your contacts to download the application for free, on iOS and Android.

You will understand, the applications presented here are free and easy to use. The hardest part will therefore be to make your choice and then convince your loved ones to use it to go directly via WiFi and thus avoid paying for calls on landlines or mobiles.

What year is this Macbook serial number “c02vd00phv2v?”

What year is this Macbook serial number "c02vd00phv2v?"