For example, it is being said that with the passage of the SBP Act, the SBP will become a slave to the IMF or the SBP will have more powers than the Governor, the Prime Minister, the President. Any law, NAB, FIA Or the anti-corruption unit will not be able to take action against it, so we discuss them all in detail here 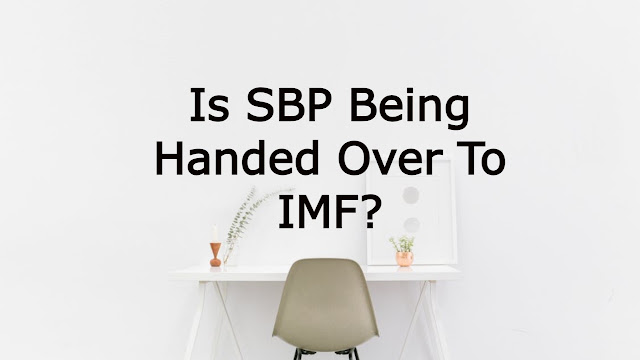 I’m not an economist, but my friends are under pressure from their followers to write about it. Anyway, every other day a new topic is created. The media needs something to beat the crap out of them. Every step of the present government has to be criticized but some questions are very clear. I read many articles and watched the program but the position of Mr. Asim Chaudhry seemed very close to the reality so I followed him.

See also  Coming back up

Because the SBP may have three billion rupees, politicians use such slogans to rob the fair. That is why it was very important to give the SBP decision-making power to control fiscal deficit loans and projects.

It is not that you said I want 100 billion, then SBP will give you 100 billion immediately

Therefore, the SBP was freed from government control and given jointly within Parliament so that the power would be vested in the whole Parliament instead of one servant and then projects like Metro Train would not be repeated due to one person’s mental disorder. The governor is first appointed by a committee of the Ministry of Finance, but the law has been changed so that the decision of the governor will be taken by the cabinet, which will send the president of Pakistan for approval to elect this nation in the name of colonial powers and religion. How easy it is that the great intellectuals seem to be doing these two things instead of talking about the argument. Guess, does the President of Pakistan invest in the IMF or the World Bank? How did the SBP come under the control of the IMF? The thing that is written in this law is that the Governor, the NAB, the FIA ​​and the Anti-Corruption Unit will not be able to take any action against the SBP. ??

Before answering this question, listen to how the governor can be removed. If the governor commits a misconduct, the parliamentary committee will investigate and take the case to the court of law. In the light of the investigation of the company or decide on the report of this company, they will be able to remove the Governor after the President of Pakistan, if the Governor appoints the Governor on the recommendation of the Prime Minister and also removes. If so, how did the governor become stronger than the president and the prime minister? And if the court of law can investigate against him, then how did he become above accountability ???

See also  How can we define education?

I am writing all these details because the market for rumors is heating up in our country. Obviously, the people do not go into these details and the rumor mongers are scrolling. The next rumor that is being spread is that the SBP governor Will not be held accountable, the question is whether the Governor SBP was accountable in the previous law? The previous law only stated that the SBP will submit a report to the Parliament annually. Now what will be submitted in this report or not? While the new law stipulates that the Governor SBP will appear before Parliament in person and give an annual briefing to Parliament outlining the monetary policy, economy, financial system, banking sector and various economic factors.

And Parliament can summon any member of the SBP, including the Governor, to Parliament at any time of the year and the SBP will be responsible for publishing this report at least twice a year so that all the people know that the country’s economy, monetary The main reason for the propaganda about the direction of the policy and the financial system is that in the future no orbital pockets will be able to announce that the pockets have been filled.

And this is the problem that the opposition is screaming at and has left its own hired economists in the market to go mislead the people and the biggest orbital uncle among them is Qaiser Bengali Baba who has left the rumor that The bank will stop paying the salaries of the employees. People at such a high level do not know who makes the economist. The law has not been passed that the SBP will stop paying the salaries whenever it wants and there is no mention of it. Don’t waste your time with false propaganda. If anyone has any questions, you can contact Mr. Asim Chaudhry! ۔

How Can You Get A Newborn Baby To Sleep At Night