What Is Quantum Physics?

What Is Quantum Physics?

Quantum physics covers all the fields of physics where the use of the laws of quantum mechanics is a necessity to understand the phenomena in play. Quantum mechanics is the fundamental theory of the particles of matter constituting the objects of the universe and of the force fields animating these objects. 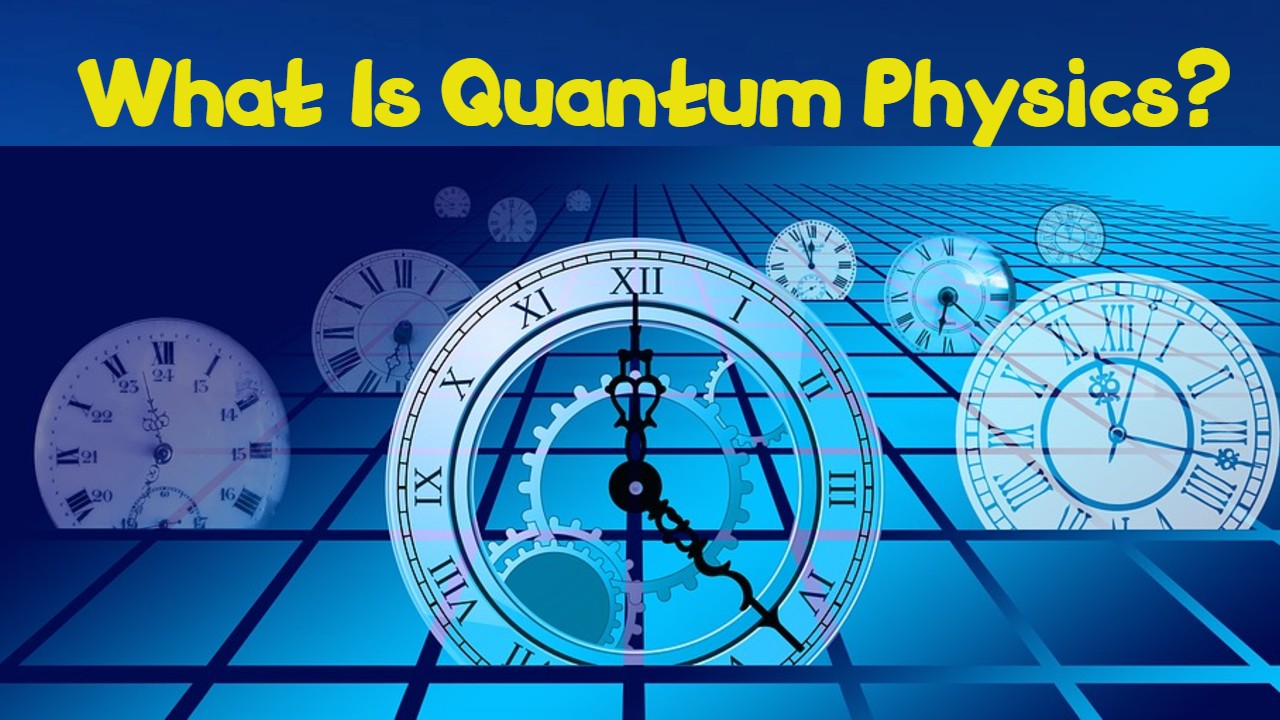 Combined with special relativity, quantum mechanics has indeed made it possible to build the standard model of elementary particles from what is called quantum field theory. We try to unify the laws of quantum mechanics with general relativity. The theory of quantum gravity is still in the works, but the two most promising attempts are the theory of superstrings and the theory of loop quantum gravity. They make it possible to make quantum cosmology which, here too, is still under development. Unlike the Standard Model, which has been firmly confirmed by experiments such as the discovery of the W bosons and the Brout-Englert-Higgs boson, there is currently no evidence to support the theories of quantum gravity.

Here we see two of the most famous equations governing the quantum world. This is Schrödinger’s equation (top), famous in quantum mechanics, with one of Heisenberg’s inequalities below. The background image is that of particles spiraling in a bubble chamber immersed in a magnetic field. Bottom right, a Feynman diagram illustrates the beta decay of a neutron (n) into a proton (p).

Here we see two of the most famous equations governing the quantum world. This is Schrödinger’s equation (top), famous in quantum mechanics, with one of Heisenberg’s inequalities below. The background image is that of particles spiraling in a bubble chamber immersed in a magnetic field. Bottom right, a Feynman diagram illustrates the beta decay of a neutron (n) into a proton (p).

The theory behind quantum physics is highly mathematical and conceptually very subtle. There is also a wide spectrum of physical interpretations of quantum mechanics beyond the orthodox interpretation known as Copenhagen. Quantum mechanics gives an astonishing and not very intuitive description of particles, electrons or photons for example, which in a certain way are also waves, and which can be found simultaneously in two places, or cross obstacles that one would think insurmountable. (tunnel effect).

At the heart of quantum physics are the mysterious amplitudes of probability for all physical processes. The values ​​of the physical quantities are then governed by laws of probability during a measurement. The probability amplitudes present interference, diffraction and other phenomena similar to standing waves on vibrating strings or in resonant cavities. They lead to the quantification of energy in many physical systems, starting with atoms and the electromagnetic field. They limit the interpretation of phenomena in terms of classical waves or particles. Heisenberg’s inequalities, for example, do not allow simultaneous attribution of a speed and a position to an electron.

Between the world of the infinitely small (elementary particles), and that of the infinitely large (the Big Bang and quantum cosmology), quantum physics is deployed in all areas of atomic, molecular and of course nuclear physics. . There are, for example, quantum chemistry, quantum optics and condensed matter physics.

Thus, the laws of quantum mechanics explain why atoms and molecules are stable, can emit and absorb light, but also combine in chemical reactions. They account for phenomena as surprising as the superconductivity and superfluidity of helium, but also less exotic phenomena such as the ferromagnetism of magnets and the electrical conduction of metals or the existence of insulators. He also occasionally introduces himself into solid-state physics a whole zoo of new quantum excitations, which are called quasiparticles. The best known are phonons, magnons and excitons.

Quantum mechanics further explains why and how the Sun shines, with synthetic reactions of helium and deuterium, and the origin of the carbon nuclei in our body. It allows us to understand the existence of white dwarfs, neutron stars as well as to know the composition of stars in galaxies and the structure of the Milky Way via the study of spectral lines such as that at 21 cm from hydrogen.

Quantum physics is finally at the heart of modern technology, because the operation of lasers, masers, CCDs and electronic components of our readers and computers is based on its laws. Mention may also be made of the field of MRI and techniques based on NMR, as well as electron microscopy. In a few decades, the controlled fusion reactors, which will perhaps succeed Iter, will employ superconducting magnets like him. It is also possible that a large-scale technological revolution is brewing with young quantum information disciplines and the mythical quantum computers. There is even speculation about the role that quantum mechanics could play in biology and neuroscience.

Quantum physics is not a finished field: it contains paradoxes that are not yet fully understood, such as those of Schrödinger’s cat and the EPR effect, although great progress has been made in understanding them. since the early 1980s.

what is quantum mechanics

See also  What is the Difference Between an Anti-Social and an Introverted?
Previous Post

We’re Working on Setting You Up Google AdSense

We're Working on Setting You Up Google AdSense